The monstrance was made by Enrique de Arfe, a silversmith of German descent, in 1515-23. It was commissioned by the Chapter of the Cathedral of Toledo to house the gold ostensorium that had belonged to Queen Isabella of Castile, made by Jaume Aimeric. The said ostensorium was bought in 1505 by the Primate Chapter in compliance with the Queen's Last Will and Testament, by order of Archbishop Francisco Jiménez de Cisneros. Allegedly, the piece was gilded with the first gold that came from America.

Enrique de Arfe's monstrance, 309.5 cm tall, is made in gilded silver and is conceived as a hexagonal gothic tower. The rectangular sections of the frieze at the base shows the gilded silver reliefs of the Arrest of Jesus, St. Peter cutting off a soldier's ear, Christ whipped, Jesus on His way to Mount Calvary, The Lament over the Dead Christ and the Resurrection. Silver effigies of the prophets Osee, Joel, Amos, Abdias, Jonas, Micheas, Nahum, Habacuc, Sophonias, Aggeus, Zacharias, and Malachias are on the internal faces of the dados.

Six ribbed columns rise up from the base, crowned by pinnacles and decorated with plinths, niches holding silver figures, coats of arms and surrounds. The pillars are joined to six abutments by two flying buttresses each, at two levels: the lower one, in tracery, ends in stand-alone images of St. Peter, St. Paul, St. Andrew, St. James the Greater, St. Bartholomew and St. John Evangelist. The upper flying buttress is curved, and from it sprout braces with crenellations of leaves.  The abutments rest on overhanging corbels adorned with carved gargoyles and hanging tear drops. The pillars and abutments have little columns attached that start at different heights, ending in little canopies and corbels that house thirty-four figures. The abutments end in tiny stand-alone sculptures of St. Christopher, St. Michael Archangel, St. Sebastian, St. George, St. Demetrius and St. Mercury.

It is on this level that the gold ostensorium bought by the Primate Chapter at the Queen Isabella of Castile's auction and set on a star-shaped pedestal, is housed. It is a portable monstrance. The stand presents a knot in the shape of a little terraced temple on three floors. Enamelled ronde-bosse figures of St. James, John the Baptist, St. Peter, St. Paul, St. John the Evangelist and the Virgin are on the main floor. A prism-shaped rim with niches holds the enamelled relief figures of St. Sebastian, St. Christopher, St. Francis and the Virgin Mary. The part that houses the luna is a little temple with six columns adorned at mid height with spikes, racemes and vine shoots, adorned with precious stones and enamels. The luna is decorated with emeralds, garnets and pearls, and ends in a cross with straight arms all studded with diamonds. The gold monstrance ends in a cylindrical dovecot with enamel doves looking out of the openings, and a huge sapphire.

This first section of Arfe's monstrance, which houses the gold ostensorium, closes in a star-shaped vault of bosses and tiercerons with moulded ribs. The keystone carries a pendant in enamel and precious stones, and eighteen rosettes with cherub heads. These are interspersed with six medallions with mid-relief figures of angels, three holding little bells and the other three originally held incense burners. There are also twelve enamelled cabochons with stars.

Above the vault, a crown-shaped section formed by lobulated arches adorned with crenellations of thistle leaves, balustered pear-shaped ornaments and encrusted stones. Six angles carrying Passion instruments hang from the base of the crown. This section carries plates with relief figures of the four Evangelists, St. Francis and St. Jerome. Above this, stand the ronde-bosse figures of King David and King Salomon, and of St. Ildephonsus, St. Eugene, St. Julian and St. Eladio, under an open arch and flanked by angels. A figure of Christ resurrected stands on a pedestal in the centre of the crown.

Further above, a crown similar to the preceding one, but smaller. Each section houses the ronde-bosse figure of an adolescent, flanked by little cherub heads, and with two children above them. Inside, a figure of a naked Baby Jesus, giving a blessing. The last roof covers a section shaped like a truncated pyramid and from it hangs a little bell. A bulbous crest sits on top, with the Holy Spirit in the shape of a Dove hanging from the keystone. The monstrance ends in a silver-gilt cross with eighty-six pearls and two emeralds, the work of goldsmith Láynez, set on a base adorned with precious stones.

The whole stands on a silver trough-shaped pedestal with bronze overlays upheld by four silver angels, made in 1741-42 by Manuel Bargas Machuca, the Cathedral's silversmith, following the models of sculptor Narciso Tomé. 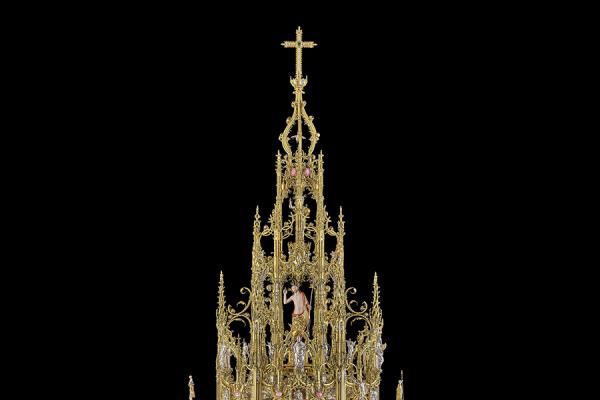