The current floor plan was made by Cardinal Cisneros, who ordered its reform whilst leaving some of the previous elements remaining. Thanks to the move to one side of the Chapel of the Old Monarchs (los Reyes Viejos) he got an enlargement, while the king Alfonso VII on the left, his son Sancho the Desired or Sancho the Brave on the right, remains buried in their original sepulchres. The majestic altarpiece made of polychrome and golden wood, was designed by Petit Jean, under the orders of Enrique Egas and Pedro de Gumiel. Its construction lasted six years (1498-1504) and great sculptors such as Felipe de Bigarny, Diego Copín and Sebastián Almonacid have all worked on it and Francisco de Amberes and Juan de Borgoña gilded and polychromed it. The altarpiece is three panels in width and five rows high, staggered with two narrower panels at the end, and seated at the base is a great predella. In the centre in the lower part of the altarpiece, is the Tabernacle. A great filigree work of art made on golden wood. The atrium of the altarpiece is finished off with a huge Calvary surrounded by a starred sky. On the left side of the chapel we find the Cardinal Mendoza sepulchre (†1495), one of the earliest works of art from the Spanish Renaissance, attributed to Doménico Fancelli. The Main Chapel has one of the most sumptuous craftsmanship grilles from the Spanish Renaissance, made by Francisco de Villalpando and it took more than 10 years to complete. The piece is divided into two panels and five rows and is finished with a magnificent Crucifix and Charles V coat of arms. 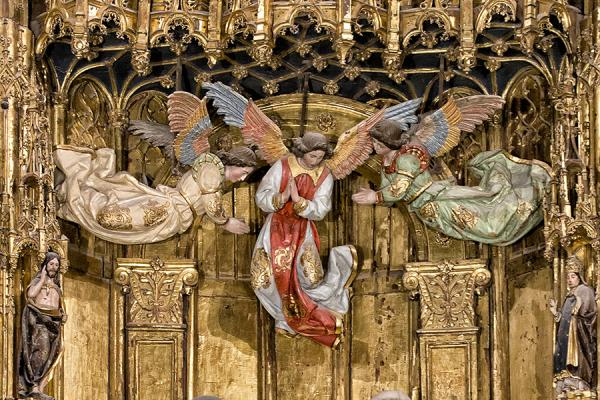 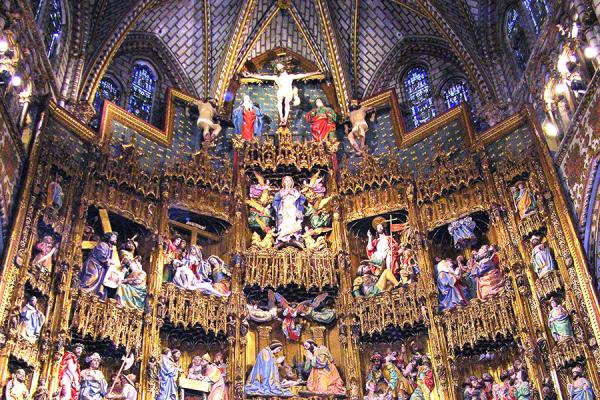